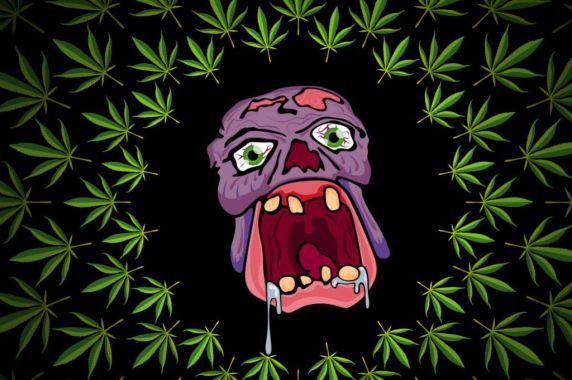 I wanted to bring some rarely talked about awareness about marijuana to Facebook, simply because it’s becoming more and more legal in more and more states here in the US. So, I put a simple little ‘sign’ up that I made that absolutely blew it up. My one sentence that I posted is below, and was directed at those followers and ‘friends’ who claim they are believers in Jesus Christ.  I have almost 2000 followers, most of whom asked ME to be friends with THEM, with the exception of about 10 of people who I personally asked.

God’s command to be “sober and vigilant”

So, if you’re a believer,  you may be able to feel some of my disgust in their responses, here are just a sprinkling of the comments I received.  The majority of comments I received used profanity of extreme proportions, so I had to delete most of them.  I do not want profanity and hate on my Facebook page.  After deleting the comments, I received even worse profanity and hate speech because I had the audacity to delete their profane comments… as though profanity is okay and acceptable to me.  I serve Jesus Christ and profanity is NOT okay by anyone anywhere in my world.  Now, below is just a little sampling of what they said.  I tried to clean their words up a bit:

There were so many more comments from professing believers who were aggressively nonsensical about defending their use of marijuana – as though I was ‘the one’ in charge of deciding whether or not marijuana would remain legal or not!  If these people would be as passionate about God and healthy Biblical living as they are about being high on weed, there lives could be awesome!  They have chosen being high instead of serving God.  Their words spelled complete and total certifiable  i-n-s-a-n-i-t-y!  To me, this shows what THC/weed is doing to 1) dumb down Americans to bringing them into submission, 2) to break down families, 3) to destroy the brains of children, 4) to cause bad decision making, 5) confusion, 6 memory loss, 7) to cause bad parenting, and more.

To the brethren I say read your Bible.  Choose a Bible that is more old school than the radically changed ‘modern’ versions.  Those new versions, for the most part, have destroyed the spirit of God’s Word and changed the wording so that all sin is a good thing… even to the extent to lie that Jesus was not God and was a sinner like the rest of us. That, my friends, is HERESY and reflects no knowledge of God whatsoever.

via I Have to Complain Today – is Anyone There? — National Addiction News

This makes for an excellent debate, hence why I shared most of it to Calling All Addicts.  To be honest, I feel this person’s pain; I don’t think he deserved this type of treatment, simply because no one should ever be chastised for his or her beliefs with regard to sobriety, no matter what they are.  And I’m coming at this from every point of view; if you choose to use medical marijuana to alleviate anxiety or even the symptoms of opioid withdrawal, then that is your prerogative and I will support you 100%.  However, if you choose to not use marijuana, then that is totally okay, too.  Personally, I don’t like the way pot makes me feel, so I made the decision a long time ago to not use it.  I’ll be damned if I’m going to be scorned, cursed, and insulted for choosing sobriety in any circumstance.  It makes no sense in my eyes, and those types of arguments are just ridiculous.

I won’t even begin to indulge in the like-minded activity in order to prove a point, either.  That would make about as much sense as it would to mock a chemo patient on Marinol for chronic nausea.  Or taunting a clinically depressed patient prone to panic attacks who’s recently been prescribed Valium on an “as needed” basis.  It’s the same thing, just with a different illness, and a different course of treatment.  These medications have undeniable, positive clinical benefits.  However, both of these drugs happen to be examples of psychoactive substances, which means that they alter brain function with regard to perception, mood, behavior, cognition, etc.  No one deserves to be socially banished, ever, for choosing sobriety.  It almost reminds me of Americans’ Constitutional right to freely practice any religion, or lack thereof, to be honest.

No one deserves to be discriminated against today because he or she chooses to not spoke weed, or drink booze, or vape, or rail coke, blah blah.  This is probably the most severe form of peer pressure that we are seeing right now in America.  It has to stop.

One thought on “I Have to Complain Today – is Anyone There? — National Addiction News”